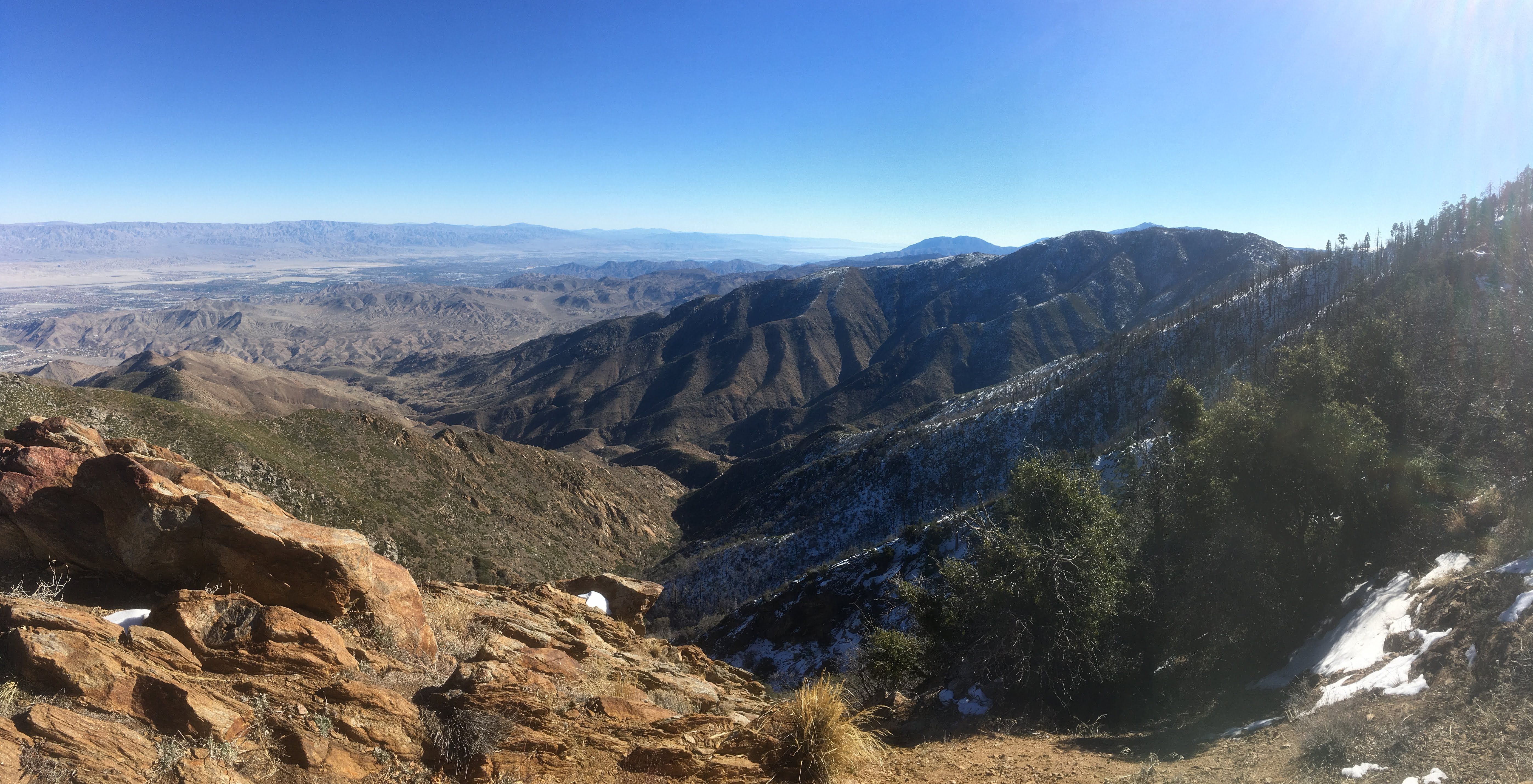 With my recent move back to the desert (La Quinta, CA) I wanted to chronicle a series of hikes where I provide the information that I sought out before the hike, or discovered later, because this information was what I needed to know.

I'm 25, in decent shape, usually hike alone (not always by preference), and like to plan a decent amount. If that's relatable, I suggest continuing. The hikes I'm choosing are for slightly more experienced hikers with sometimes a little travel time, sometimes a lot of travel time.

When I talk about weather, finding trails, or trail stats these are the apps where I get that information from:

If you are interested in other hikes that can be reached from the Coachella Valley, below are some small posts, that may or may not be useful from last winter (some might just be a picture actually).

I need to add a disclaimer, that although I intend for my posts to be used as trip reports, or helpful guides, you are still hiking at your own risk. You should always carry the survival essentials, let others know your hiking/route plans, and favor caution.

I contemplated whether or not Maps 3D was bugging out on me. I could not believe the elevation gain was that much (I still don't know if I believe it, but I'll post the 'Track Recording' later). It also was almost a mile longer than it was stated on AllTrails.

From trailhead-to-peak the elevation change is about 3,400 ft (which was what AllTrails said it would be)—however—somewhere in there I ended up climbing an extra 1,400'.

Despite the technical questions, this hike as incredible. I cannot believe I have not been up to this trailhead before, or been on the San Jacinto ridge. This hike also did a little diddy on the PCT. I was able to do this hike on a beautiful day in January, and was one of five people on the trail.

The star is placed on the approximate location of the trailhead. It is located NE of Hemet Lake on the other side of Highway 74.

I did have one issue with the way the trail finished it's ascent to Apache Peak, and some confusion as to which peak I was hiking to. I will discuss the problem, and solution to that issue, in 'The hike' section.

The San Jacinto Mountains are unquestionably gorgeous and powerful. The drive is less than a hour from La Quinta, and there are a few more peaks I need to see the top of before I depart from this area.

There are other short notes, and reviews, of the hike here.

As you can see in the picture above, the hike is located near Lake Hemet and on the west side of the San Jacinto Mountains. It's a short drive (3 miles) off of Highway-74. Using the 'Directions' feature on AllTrails it was fairly simple to find the trailhead.

The actual start of the trail starts at the end of dirt turn-out by the road.

However, I should point out that the trailhead is not easy to spot. There is not a sign, and the parking lot is just a turn-out (before a left-hand bend in the road) that could maybe fit ten cars. Searching for 'Spitler Peak Trailhead' on Google Maps should take you right on top of it.

This is a fairly popular trailhead & hike. It goes up to the Pacific Crest Trail, and then to either Spitler Peak or Apache Peak. This area also has a couple other trailheads and camping.

There was a fairly major fire in the area, so you are exposed for most of the hike (unless you go in the morning and beat the sun around the slopes).

Below is a picture I took on the descent that shows the level of exposure on the hike. This is what can be expected for a little more than half of the overall hike.

Right from the start you can see Spitler and Apache, and they are pretty visible throughout the majority of the hike.

The peak on the left, that has sunlight, is Anstell Rock. In the middle is Apache, and on the right is Spitler.

The trail seems well maintained. I don't remember having to duck away from branches or step over logs. It is also easy to follow with very few trail intersections. I started the hike at 7 a.m. and the temperature was around 40 degrees. By 8 a.m., the sun was out and I was shedding clothing.

I had read a review (or two)—which I agreed with—that the first part of the hike is enjoyable, and at a steady grade. It begs the question, "When do I start actually ascending?". That question is answered, strongly, later. Enjoy the changing environment in this section of the hike, because it is quite interesting.

There are two long traversing sections in the beginning before the sharper incline, and on the second traverse (heading back towards Apache Peak) is where I first encountered snow on the shady side of the slopes.

I had brought my yaktraxs, but never quite felt compelled to dig them out of my backpack.The snow was in sections depending on how much snow exposure that part of the trail got. Digging my boots in, with the help of my poles, seemed to be enough to keep my footing. The snow was also fluffy, as opposed to compact, which made it easier for me to keep my traction. Later I'll make a quick note about weather conditions on this hike.

There are a few stream crossings along the trail, none of which were an issue.

The streams had a little flow to them, and if you were looking to filter some drinking water you could, but your filter may have to work pretty hard.

The switchbacks start as you get closer to the ridge between the two peaks. This part of the hike seemed to last longer than it should in my mind, but that's how it is sometimes. There are a number of switchbacks as you hike through the taller branches of the burned brush plants.

However, beautiful views are waiting at the top of this difficult section. Here, you meet up with the PCT and have the option to go right, to Spitler Peak, or left to Apache Peak.

Desert cities are off to the upper left. I am standing about where the trail junction is. Spitler Peak is towards the upper right corner of photo. If you look far enough, you can see the Salton Sea in the distance.

At this point (if you are heading to Apache) you will make your way up the slope to the left, hiking along the PCT heading north. I thought the rocky peak in front of me was Apache, I was wrong, the peak(s) of Apache are behind that.

There are a surprising amount of pine trees on the eastern slopes that seemed to dodge the fire as it crested the ridge.

I had some confusion during the final ascent to what I think is Apache Peak. As you can see, in the photo below there are two apparent peaks in the final section of this hike.

There is a field, or plateau, towards the peak that is spatially pleasing and relaxing. It has some interesting foliage, and scenic back drops.

Here is where the controversy began. I am very close to the west (left) and east (right) peaks, and it seems like a cake walk to the top.

Maps 3D tells me Apache Peak is on the left, but AllTrails shows the route going around the back side and ascending from the north to the east peak.

I resolved that it didn't really matter which one I went to, and that I was letting the small details affect the true purpose of my hike. However, I did decide to ascend the left peak from the north side, by walking around the peaks (see picture to right).

This route offered some nice views of the Coachella Valley, and I figured someone else knew something I didn't.

But, if you take a closer look at the Track Recording (red line denoting elevation change over distance). The peak is characterized by a "W" shape. If you look back at my picture showing the west and east peaks, you will see, there's no apparent sign of a looming descent.

What happens—if you choose to ascend from the north slope—is you trade a section of already hiked gradual elevation for a section of steep elevation gain on the backside.

I came around the corner, extremely puzzled, wondering why I didn't take the other route.

Heavier snow drifts on north side before ascending

Just past the view of the rock on the left/the lone pine is where I found what resembled a trail among the scattered snow.

I really noticed the elevation as I began the final ascent up this slope. Not only was I working a little bit harder, but I seemed to need more breaks to catch my breath. The elevation at the peak is around 7,400 ft, which isn't that significant, but enough to warrant a reaction for me.

The long yellow line denotes the route I should have taken, opposed to the route of the shorter yellow line that goes around the east peak.

Despite the confusion towards the top, and the added elevation, I had reached the peak! I spent the next 45 minutes enjoying the impressive views, food, and a few nice places to sit down and rest.

There is a smal dead pine helping to mark the top of the west peak.

Facing Northwest along the San Jacinto range with the more prominent (and well known peaks) in the distance.

As you can probably see, I had pretty fantastic weather for January. The temperature was supposed to get up to almost 50 degrees around Idyllwild.

The day following this one, the snow level would drop to 5,000", and much more snow would be dropped along this trail. In the days following that, some rain would come in as well. Obviously, the character of this hike could change dramatically depending on the weather. Be sure to check local weather reports and see if you can find a recent report.

On the way back down I stopped to talk to the other four people on the trail that day. They suggested Anstell Rock, Tahquitz Peak, and it was obvious the San Jacinto Mountains are a great place to spend your time. I definitely have more hiking to do in these mountains.

A few things to note

A couple things I want to mention, or reiterate. I will make them quick;

Thanks for visiting the site, and I hope this was entertaining or helpful in some way. Please, share any thoughts that you may have!